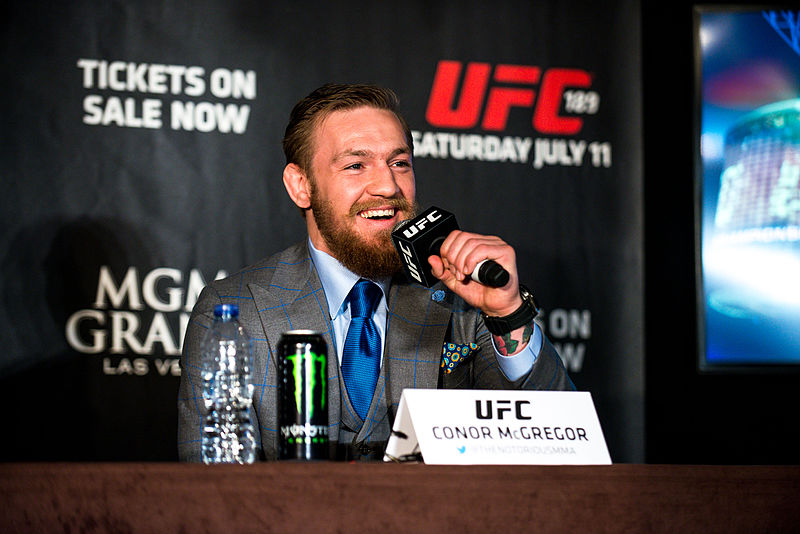 Thursday night, McGregor attacked a bus delivering several UFC staff members and fighters by throwing a dolly and nearby trash cans into the passenger windows. McGregor appeared to be retaliating against main event fighter, Khabib Nurmagomedov, for a scuffle he had with McGregor’s boy and fellow UFC fighter, Artem Lobov.

In acting like a complete asshole, McGregor smashed a window, cutting the face of lightweight Michael Chiesa and flyweight Ray Borg who had to be treated for their injuries. Chiesa was scheduled to fight Anthony Pettis and Borg was scheduled to fight Brendon Moreno this weekend, but both have been scratched from the card.

McGregor was taken into custody that night for three counts of misdemeanor assault and one count of felony criminal mischief. 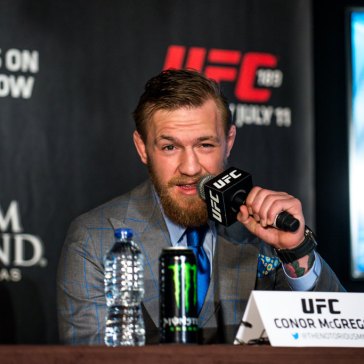 Photo via Flickr.com from Andrius Petrucenia 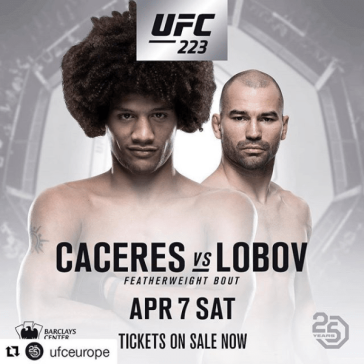 Artem Lobov, the fighter McGregor sought to defend, had his fight with Alex Caceres removed from the card due to the incident. After all this mayhem, to a card that McGregor isn’t even on, three fighters have been eliminated from his altercation.

On top of all this… Max Holloway, the replacement for injured Tony Ferguson in the main event with Nurmagomeov, missed weight and was deemed medically unfit to fight.

After deliberation about Anthony Pettis fighting Khabib, UFC and Dana White made a deal with Al Iaquinta to battle Nurmagomedov in a five-round fight. Iaquinta was supposed to have a fight with Paul Felder, but that isn’t happening.

According to MMAfighting.com, if Nurmagomedov wins he becomes the lightweight champion (kind of messed up because Ferguson technically owns the belt), but if Iaquinta wins, he does not get the belt because he weighted “two-tenths of a pound over the championship weight limit.”

Iaquinta is actually from New York, so he should have the crowd on his side. Nurmagomedov has had a busy week mentally preparing for about four different fighters within the past week and dealing with the whole McGregor incident.

Could have been a bit distracting. Maybe Iaquinta has potential to upset? Doubtful.

What a mess this has all become.

This UFC 223 main event has been hyped for so long. The winner would be most deserving to fight McGregor. And that’s what people want, right?

But it seems to be cursed.

The last true title fight remaining is Rose Namajunas vs. Joanna Jedrzejczyk. And even Namajunas wasn’t feeling well throughout the week. CheapSeatFans and UFC fans alike are all praying that they can keep it together to see this fight.

As for McGregor and this entire “incident”, I am completely turned off. McGregor has pissed me off. It is one thing to be throwing water bottles during YOUR OWN media press conferences to get publicity, but to crash another event and ambush fighters that have an event in less than two days is completely unprofessional and disgraceful.

Like I stated at the beginning of this article, McGregor helped make the UFC popular with his big mouth and great fight performances to back it up. But never has he tried to deliberately ruin another UFC fight card like he did when he went after Khabib.

This card was struggling the past week, but at least injuries and last minute missed weight from replacements is, for the most part, uncontrollable. McGregor’s antics this weekend were uncalled for and added to the misery of waiting months for a legit title fight and then it being called off.

I personally believe Khabib Nurmagomedov is going to beat whomever you put in front of him and NEEDS to fight McGregor. McGregor is the star of the UFC, I get it. But we need a respectable match up. No more McGregor/Aldo. No more McGregor/Holloway. I don’t even want McGregor/Ferguson.

McGregor can’t be given easy contenders, especially when he will literally ruin other fighters events, go try out boxing or some other sport and come back trying to leverage Dana White and UFC with his stardom. The great thing about the UFC is that belts are typically rotating. McGregor cannot last forever and Nurmagomedov is the beginning of the new age.

Nurmagomedov has even more inspiration now from McGregor’s antics. It doesn’t matter that he has now been matched up against Ferguson, Holloway, then almost Pettis, and now Iaquinta. “The Eagle” is going to win tonight by a large margin and McGregor will be next.