I’m disappointed to write that Aldon Smith, seventh-overall pick by the 49ers in the 2011 NFL Draft and recently released by the Raiders, has been arrested again according to SFgate.com.

Smith has been arrested three times in the last two months. First arrest was on March 3 for bodily injury, false imprisonment and vandalism. Then he violated judge’s orders to stay away from the victim and was arrested on March 23. Now, for his third arrest, Smith violated electronic monitoring conditions.

Smith hasn’t played football since 2015. Since then he has been suspended for violating the NFL’s substance abuse policy and well… arrested. A lot.

It is a shame to hear legal issues with Smith again. A guy who once made the Pro-Bowl and All-Pro team just cannot get his act together. Now after having three arrests in two months, it looks like Smith will most likely be done in the league.

This feels like déjà vu, and yet, his name sticks around in the headlines every time he gets in trouble. I honestly believe this is the last time we will be talking about him getting arrested because we simply won’t care the next time.

Smith’s potential has definitely gone to the point of no return due to issues off the football field. I hate seeing him throw away abilities that could have put his name in Canton, Ohio. I hope he can get his life together for his own sanity, but not because I hope to see him in the league again. It is just too far of a stretch to think he can play for an NFL team again after all his legal issues and league violations.

Read Twitter’s response to the news below: 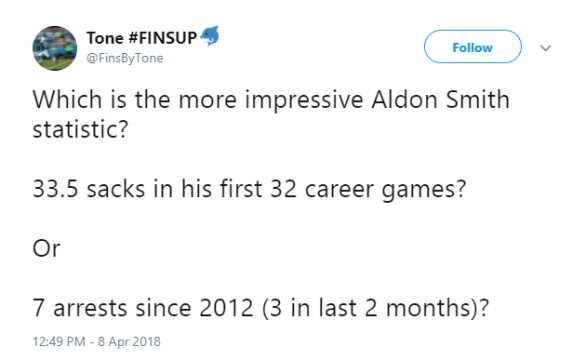 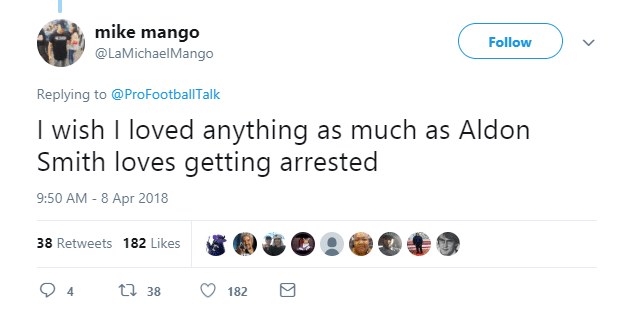