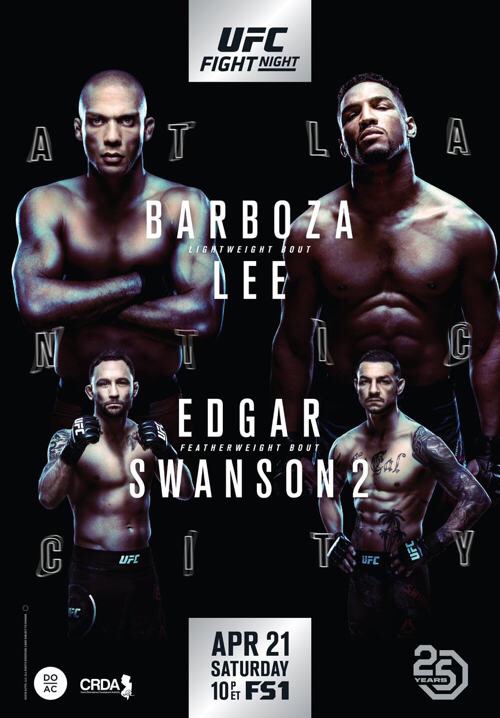 Another weekend, another lightweight main event. This time at Boardwalk Hall in Atlantic City, New Jersey on Saturday, April 21.

Lightweights Edson Barboza and Kevin Lee will compete for the main event while featherweights Frankie Edgar and Cub Swanson will rematch in the co-main event. Both have potential to be some entertaining free fights on FS1.

Now that they are going at it again four years later, both have fallen to Brian Ortega and aren’t quite the headliners they used to be.

I don’t mean to talk down either of these two fighters by saying that. I fully expect them to have an entertaining fight, but the truth is they need to string together a couple wins before they are considered contenders for the belt again.

For this fight Edgar has to bring his normal energy and dominate the fight like last time. Swanson took way too many punches last fight because he didn’t maintain distance with Edgar. It ultimately left him too dazed to fend off Edgar on the ground which Cub is mediocre at.

Swanson needs to use kicks to keep his distance and try to keep the fight standing. Edgar brings a lot of energy and pressure to a fight, especially since he is fighting close to home, so I believe Swanson has wait for his opportunity to counter off some of that excitement.

Will that actually happen? Unlikely. I think Cub may try it out for the first round, but will eventually grow impatient and try to knockout Frankie, which is hard to do. The guy can last a long time in the octagon.

Edgar def. Swanson via TKO in second round

Barboza, 32, is 13-5 in the UFC and Lee, 25, is 9-3 in the UFC. Both have lost to the former lightweight champion Tony Ferguson. In Barboza’s case, losing to both Ferguson and current champion of the division, Khabib Nurmagomedov.

Lee’s last fight was against Ferguson in October 2017 where he was submitted by a triangle choke.

Lee is the favorite in the fight and he believes he is a part of the “big three” in the lightweight division. He unprofessionally missed weight by a pound and will have to forfeit 20 percent of his purse this time around.

While Lee is the favorite, I don’t think it is fair to sleep on Barboza. I think he might just stand a chance against Lee if he can land some strikes early. Especially since he has some nasty head kicks.

Since Barboza was exposed by Khabib’s wrestling in the last fight, we can expect to see Lee use the same strategy. If this fight doesn’t end by big strikes on the feet, I believe it will be a long grappling session for Lee to stay in a dominant position.