NHL Playoffs are almost upon us. The 16-team bracket will kickoff April 11 with number one seeds earned by the Nashville Predators (Central), Vegas Knights (Pacific), Tampa Bay Lightning (Atlantic) and Washington Capitals (Metropolitan).

Vegas betting odds has Nashville as the favorite, followed by the Boston Bruins, Tampa Bay Lightning, Vegas Knights and then the Pittsburgh Penguins.

A three-peat, back-to-back-to-back or whatever you want to call it, hasn’t happened in the NHL since the New York Islanders won four straight from 1980 to 1983.

So can Pittsburgh be the first team in 35 years to do it again?

I believe they can.

First, let’s address the negatives and all the hate that may be thrown at us:

Those that doubt the Pens’ ability to make a run at the Cup typically resort to the depth chart as the sole reason we will lose. This is a reasonable argument against the Pens’ success when a team, of course, must rely on the bench to play active roles. Obviously no one can replace the likes of Sidney Crosby and Evgeni Malkin when they hop off the ice, but players like Jake Guentzel, Derick Brassard and Conor Sheary have to be able to step up.

Guentzel, 23, was able to do so in the playoffs last year as a rookie, but has seen a minor dip in performance during his sophomore year. Sheary, 25, isn’t the biggest and most-known left winger either, but his heart goes a long way in the playoffs. Brassard, 30, on the other hand, was one of the best centers available before the trade deadline. Brassard has also earned playoff experience with the Columbus Blue Jackets and New York Rangers, with 55 points in 78 career playoff games (22 goals).

Similar to our depth issue, the Pens do not have Hall of Fame goaltender, Marc-André Fluery, backing up Matt Murray like we did last year. Fluery is with the Vegas Knights now and the Pens have less than spectacular backups. Unfortunately for the Pens, the team has seen a share of backups since Murray experienced injuries late in the season.

Tristan Jarry has started about 23 games for the Pens this year going about 14-6 with a .908 save percentage., but the Pens sent him to the minors on April 4. Which is fine because I doubted his abilities in the net anyways.

The other goaltender we have seen this year besides Murray and Jarry, Casey DeSmith, has started about 11 games for the Pens this year going 6-4 with a .921 save percentage. In the minors, he held the Wilkes-Barre/Scranton record for most saves in a playoff game. So I can get behind this backup. Otherwise, I completely trust Murray starting.

A big component of stopping the opponent’s momentum is killing their power play opportunities. This season the Pens are ranked 17 in NHL penalty kills, successfully defending the power play 80 percent of the time.

The Pens must play better defense if they expect to raise the Cup. In the NHL playoffs, players perform at that extra gear and I believe the defense will rise to the same occasion.

Now that we have discussed all the lame reasons other hockey teams might doubt the Pens, let’s explore why everyone is (or should be) afraid of the Pittsburgh Penguins:

“Sid The Kid” and “Geno” Malkin are two of the NHL’s best. Crosby has been unreal this season with insane goals and passes, but if you are fortunate enough to watch more than three Penguin games with Crosby playing, you will realize that he does incredible stuff every night. And he’s awesome.

I am thankful as a Penguins fan to be able to watch and enjoy what he can do on the ice. Most NHL fans have to be envious that he isn’t on their team. His efforts might overshadow the giant Russian at times, but even this year that cannot happen.

Malkin is tied for fourth in scoring at 42 goals this season (seven behind the leader, Alex Ovechkin). Meanwhile, Crosby is tied for seventh in assists with 60 and Phil Kessel is tied for eleventh with 58. While we could probably rely on the two-headed monster, the entire team is spreading the wealth, so not one player is solely responsible for their success.

Like I said, the whole team is starting to click at the right time in the season. This is most prevalent in their power play this season. The Pens have the best power play offense this season with 68 goals.

Most teams will be shook seeing the Pittsburgh power play coming at them because of their high efficiency. Good luck stopping Crosby down a skater.

What the Pens may lack in roster depth, they drastically make up with playoff experience. The Pens have lost some players that added to that experience, like Nick Bonino who led the Pens in assists during the 2016 run, but the good thing about Pittsburgh is the ability to make hustlers out of anyone.

No one believed Jake Guentzel, the rookie, would be able to excel during the playoffs, but he did. People didn’t want the fat and nonathletic-looking Phil Kessel on their team, but Pittsburgh did and he has played a critical scoring role when the team needs it. 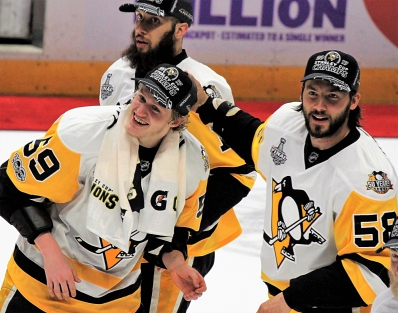 Photo via wikimedia.commons.org from Michael Miller 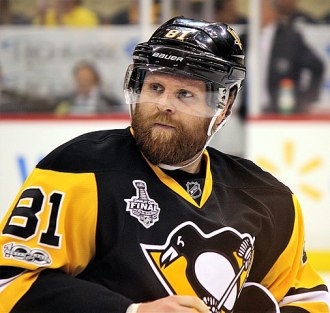 Photo via wikimedia.commons.org from Michael Miller

What all this Pittsburgh love is getting at is the Pens cannot simply be dismissed because they are seeking a third consecutive Stanley Cup which hasn’t been done in over three decades. The Pens have elite players like Malkin and Crosby. The Pens have experience in the games that matter the most. And they can avoid collapsing under pressure to win the Cup by observing what the Caps do every year and try not to replicate it 🙂

I wouldn’t be a Pens fan without throwing a little shade toward Washington.

In all seriousness, the Pens have to focus on getting past the Flyers in the first round because nothing is guaranteed. Not even the match up against the Capitals that we all want.